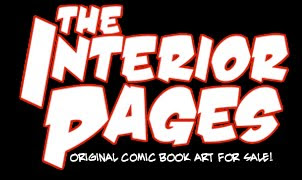 Growing up, Jason read comic books as a way to learn how to read. Years later in middle school, he met a kid who handed him a Punisher comic book and forever changed his life. After college, when money was easier to come by, Jason began buying comics again, transitioning to original comic book art and commissions. This quickly turned into a full fledged hobby. After years of collecting art and making contacts in the comic art world, Jason fell backwards into the art dealing world by helping his friend Rahsan Ekedal with his sales. After a year, he added to his stable by bringing in Joe Eisma. From there, The Interior Pages were born. Jason is married and has two kids and currently lives a few miles north of Seattle Wa.

Jason currently has over 150 pages of my original art, pinups, and covers up for sale, including all four issues of Athena Voltaire: Flight of the Falcon, both stories from the Complete Webcomics (Terror in Tibet and Wrath from the Tomb), the 2007 Athena Voltaire FCBD story, the Athena part of the Athena Voltaire/Black Coat crossover one-shot, my ComicTwart pieces, and a few unpublished pin-ups.

Check out all of the other fantastic artists that Jason represents:
Joe Eisma
Rahsan Ekedal
Scott Clark/Dave Beaty
Justin Greenwood
Brent Peeples
Juan Castro
Martheus Wade
Chad Cicconi
Matthew Warlick
David Rivera
And once you're done checking their work out, drop by The Interior Pages! Comic art makes a great Christmas gift! ;)
Posted by Steve Bryant at 7:30 AM No comments:

Today's commission is actually an inked version of a piece I did a few years back. I've uploaded the pencils for the sake of comparison.

I really enjoyed revisiting the piece. I spotted some things that I used to do in my pencils and really want to get back to. Additionally, I saw a few cringeworthy things that I was eager to fix.

I'm a much looser, confident inker these days and was thrilled to slap a juicier line on this than I would have four years ago.

Which one do you like better?!
Posted by Steve Bryant at 10:47 AM 3 comments: