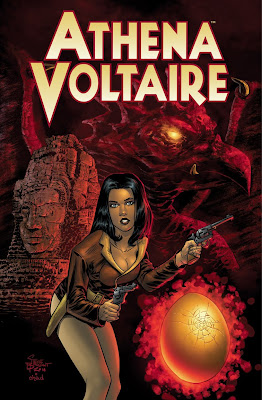 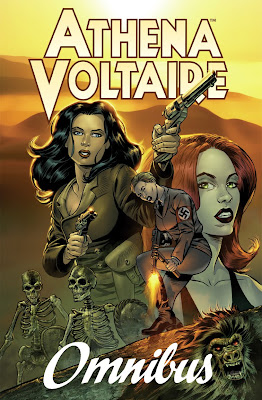 I love the fact that there's an official day for my favorite kind of comics: creator-owned ones! So, naturally, today's entry centers on my book, Athena Voltaire.

A globetrotting aviatrix battles Nazis, occult science, and mythical creatures against the backdrop of the pulp era. It’s Indiana Jones by way of Hellboy, starring a Joss Whedon-style female pilot. The series originally launched online at the Modern Tales family of webcomics sites, and earned an Eisner Award nomination.

Below is a teaser short story, The Isle of Death. The "red" cover (above) is for a short that was featured in Double Feature Comics (you can read it in its entirety for a mere 99¢).

I'm currently working on a new AV mini-series The Volcano Goddess, as well as remastering the existing AV material (200 pages or so) into an Omnibus edition (also pictured above).

Contact me for more info on Athena Voltaire, or publishing/rights inquiries.