Remembering the Work of Joe Kubert 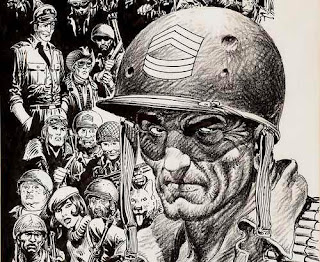 I must have been nine or ten when I first encountered a comic featuring a Joe Kubert cover. Truth be told, I thought it was some of the worst comic art I'd seen—and at that time, I considered myself an expert in the artform.

I'd been raised on a steady diet of Jack Kirby's statuesque demi-gods and John Buscema's powerful matinee idols. And most of my favorite work had been embellished with the slick brush lines of Joe Sinnot or Mike Royer, or occasionally inked with the lush rendering of Tom Palmer.

Flash forward eight to ten years: I found myself in my first life drawing class and experienced gesture drawing for the first time. Everything was about capturing a movement (hence the name, gesture drawing) and recording it. Motion, vitality and spontaneity were king.

It was around this time that the lightbulb went off.

What my untrained 10 year-old eye saw as "rough," was actually boldness. What I thought was "sketchy" was actually immediacy.  Where I had previously seen the work as "unfinished," I now saw it as fluid and dynamic.

From that point on, I checked out all the Kubert work I could find. I learned that he was more than just an expert at creating movement. Joe's compositions and storytelling were downright amazing.

I never met the man, but he was my guide on adventures on WWII battlefields, and through primeval jungles. Our expeditions took us from prehistoric earth to unknown galaxies in the far-future. And at every stop along the way, I learned something about art.


Posted by Steve Bryant at 7:30 AM No comments: