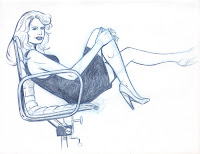 Another doctor's trip, more work in the sketchbook.

When I draw with colored pencils, I have a tendency to ALWAYS do fully rendered shading. I made a conscious effort to avoid that on this one. 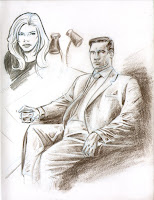 Since my dad passed away last December, I've been the "go-to" guy for driving my mom and brother to doctor visits. And lately, doctor's office visits mean sketchbook time.

Here's one of the pages that came from the most recent trip.
Posted by Steve Bryant at 4:57 AM No comments:

I have a couple of volumes of my sketchbooks for sale. I print these up for sale during convention season, but you can buy them here—through the magic of the InterWebs any time! Each book is a comic-sized volume, signed and numbered (limited edition of 500). Volume One is 40 pages and Volume 2 is 36 pages.

That's also the address to email if you would like to purchase sketchbooks but don't have a PayPal account. Email me and put Sketchbook Question in the subject line.
Posted by Steve Bryant at 2:45 PM No comments: 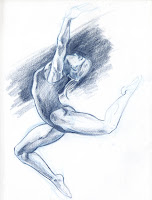 My mom's been having some trouble walking (pain in her right leg) so I took her to the doctor (and for x-rays). Everything's okay.

Here's what I worked on while waiting. It's from an article on Olympic gymnists in ESPN Magazine. I swiped the magazine in hope of finishing the picture (her extended hand is wrong and I need to fix that!).
Posted by Steve Bryant at 5:08 PM No comments:

Here's how he looks finished. I really wanted to put more drybrush in, but know that I'm prone to abusing that technique and give Jason some room to work.

Here's what Jason's plans are for the page, "I'm thinking lots of blues and greens overall with the red eyes really popping and casting some red light on the face..."
Posted by Steve Bryant at 6:02 AM 2 comments:

Tightening up the pencils on the ghost

Again, this page is the first time that we see the ghost in the story, so I want it to be right. Granted, a few things (like glowing red eyes) will be handled by Jason in the color stage of the page, but this page still really needs to sing on all levels.

At this stage, it's starting to develop...

Inks tomorrow.
Posted by Steve Bryant at 5:07 AM No comments:

Trying to get the right look for the titular character in The Canterville Ghost. He "died" in 1575, so that places him in the Tudor era. Making that era's clothes looked ragged (per the story), yet still period-specific is tough—you don't want this guy to look like he's wearing a ratty old bathrobe and jammies! And I opted to fray the leggings because who's afraid of a ghost in tights?

Tighter pencils will be up tomorrow.
Posted by Steve Bryant at 8:54 AM No comments:

A Day Late...but here's the other jam commission 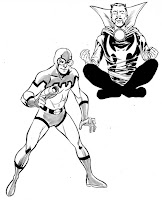 Here's another themed collaborative commission. This time out, the idea was "Steve Ditko Characters." The incomparable Mike Norton did a kickass Blue Beetle, so I did my best to keep up on the levitating Doctor Strange. I told Zack, who commissioned the piece, to send it back to me after everyone else does their figures and I'll add Doc's cape behind 'em all.

These are fun to do!
Posted by Steve Bryant at 2:37 PM No comments:

A New Commission—on a Jam Piece, This Time 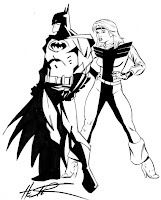 Here's a first for me—contributing to a jam piece commission. The theme was 1980s Justice League International (JLI). For those of you unfamiliar with the concept, a jam piece involves getting a number of different artists to contribute single figure images to a large composition on a single piece of paper. In the end, there can be 10 or 20 figures drawn by as many artists!

I had already agreed to the Black Canary before I realized I wouldn't be drawing her in her classic costume. It took a while to figure out how her chest piece thing worked, but I think it came out okay.

On the heels of this piece, I did another jam piece, which I'll share tomorrow.
Posted by Steve Bryant at 4:48 AM No comments:

Jason turned over the colored version last night and I added the graphic design elements. Jason is handling contact with the publisher on this one, since he's already working for them. He'll be sending this image their way in the next day or so. It should hopefully work as a great followup/reminder to look over the pitch we gave them.

I really hope this one goes through. It would be a lot of fun to do a creator-owned project for a page rate, and still be able to do Athena Voltaire. Otherwise, this one will go on the back burner for a while, because I only have time to do one non-paying project, and that's our little aviatrix book.
Posted by Steve Bryant at 6:05 AM 4 comments: I posted the pencils to this pitch piece a while back. Here are the inks. I inked it up shortly before Wizard World Chicago (where I pitched to to the targeted publisher) and followed up again at San Diego Comicon. Here's hoping that something will come of it because it's a story I'm dying to write and draw. Color genius Jason Millet has a high res version of the piece and I'll hopefully be sharing the colored version with you soon, as well.

Still finding my groove on updating blogs. Will be starting to update the Athena Voltaire and Ursula Wilde blogs regularly again later this week.

Also, I've been messing around with Twitter a bit for the past few days. My interest in it will probably ebb and flow, but it could be really handy during conventions.
Posted by Steve Bryant at 7:02 AM No comments:

Looking to the Skies A few months back, I posted the pencils to a Rocketeer commission piece for my pal, Matt. I got around to inking it a while back and finally scanned it the other day.

Overall, I'm pretty happy with the piece. Aside from my borderline hero-worship of the work of the late Dave Stevens (the Rocketeer's creator), it remains one of my favorite comic series of all time.

Part of me would love the opportunity to draw a Rocketeer story one day. The reasonable part of me, though, realizes that it always was—and always will be—the territory of Mr. Stevens.
Posted by Steve Bryant at 10:00 AM No comments: More from the sketchbook. I drew this a couple months back in anticipation of Indy IV. As important as Star Wars was in jump-starting my imagination back in my formative years, Indiana Jones (and Raiders of the Lost Ark, in particular) have left an indelible mark on me creatively—as evidenced by my work on a certain globetrotting aviatrix.

So taking a crack at drawing the main man was a lot of fun. Not my best effort, but that's what a sketchbook is for, right? To experiment, grow and learn.
Posted by Steve Bryant at 8:24 AM No comments: