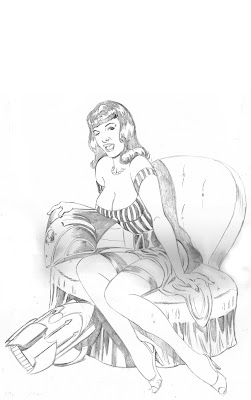 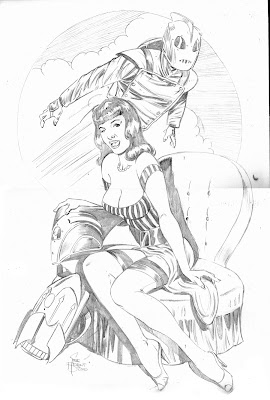 This week's theme over at Comic Twart is The Rocketeer (yes, I'm the one responsible for the theme). My finished inks can be found here.

I initially wanted to do a scene with Betty lunging with the helmet and jetpack, with Peavy, Cliff and Butch the bulldog somewhere in the scene. Additionally, I wanted to do a second drawing, spotlighting Cliff in uniform, flying (and maybe montage elements from the two series in there, like Jonas, Marco, Ham & Monk, the flying wing, etc). However, it was waaaaay too ambitious to think I could do both images, so I added Cliff flying as a vignette in the Betty piece and the problem was solved.
Posted by Steve Bryant at 11:47 AM